The Millpledge story began in 1977, acquiring Whinleys Estate Farm and forming officially in 1978. Whinleys Estate is still the home of Millpledge. Like our physical location, the company’s vision, mission, and values remain the same today as they did then – to deliver affordable, high-quality products that change the lives of our customers and their patients.

Whilst working for Cox he had met and formed a good working relationship with Graham Cheslyn-Curtis who was a sales executive for Cox. Slim knew that Graham would make the ideal partner for this new company.

Graham’s inventiveness was no fluke, his great grandfather developed one of the first-ever toothpastes supplied to the Royal Family and the Pope in the office of the time.

As the veterinary world evolved, so did Millpledge, adding depth and variety to our product range that meets the diverse needs of our customers. We later became Millpledge Veterinary and the company we know today.

We are now an international manufacturer of veterinary consumables, disposables, nutraceuticals, and pharmaceuticals, serving over 60,000 veterinary practices worldwide. 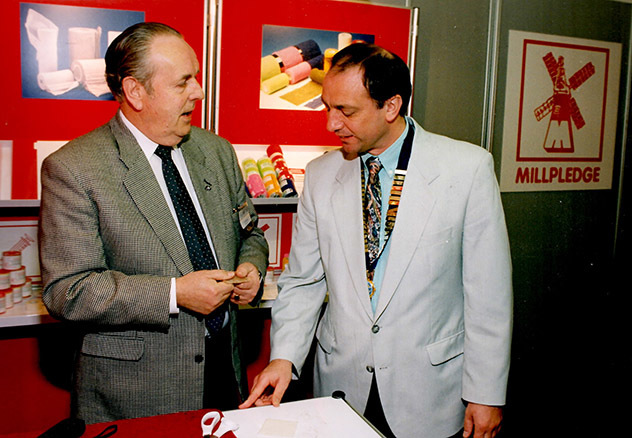 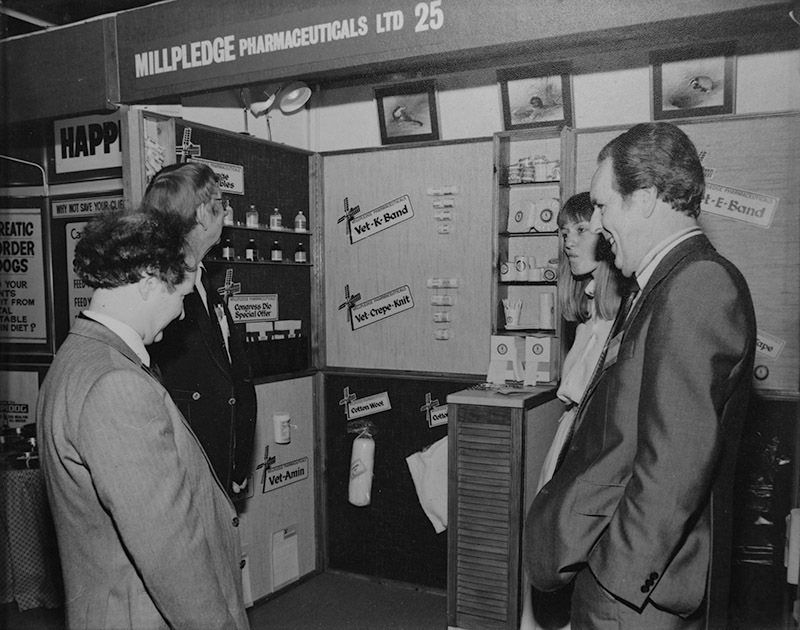 Derek Carthew establishes the company that would become known as Millpledge Pharmaceuticals, partnering with Graham Cheslyn-Curtis.

Graham Cheslyn-Curtis acquires the old Whinleys Estate Farm in Nottinghamshire and together Graham and Slim set up the Millpledge HQ.

After several successful years of the company specialising in generic pharmaceuticals Slim and Graham decided to expand the business portfolio into a wider range of products.

Graham a former Civil Engineer, turned his hand to designing and building a series of fabric coating lines alongside Dave Cheshire also an engineer. The product range quickly expanded to include stretch bandages and tapes, fixation tapes, dressings and other textile products.

Millpledge develops its own Veterinary CRM and stock control system which helped maintain its customer relationships and delivery schedules.

Millpledge re-built an old cattle barn known as the ‘Black Barn’ at HQ which became its primary warehouse and distribution point for the veterinary pharmaceuticals and disposable veterinary devices.

Millpledge opens its dedicated in-house design, labelling and IT team.

Millpledge incorporates Millpledge Systems Ltd, an engineering arm of the Group which designed and developed its own plastic moulds and moulded plastic parts for its products. The Millpledge systems team went on to further develop additional coating, spreading, weaving and bandage cutting, laminating, folding machines and our Eco-Drape™ rolling and cutting machinery.

Millpledge acquires RGF Surface Protection Ltd which was incorporated in to Millpledge systems as a heavy, industrial engineering arm to the Group.

Following the start of the pharmaceutical cascade system in the UK, Millpledge was successful in obtaining the veterinary licenses for Prednisolone BP Vet and Furosemide BP Vet tablets at the same time Millpledge is accredited with GMP certification and a home office controlled drugs license.

now known as ISO 9001 which it still maintains to this day. At the same time, Millpledge also acquires the ability to ‘kite mark’ its product which became the CE mark accreditation or ISO 13485 for Class I medical devices which following Brexit is now UKCA.

The Millpledge Pharmaceuticals brand becomes Millpledge Veterinary, so the business relates more to its customers with its wider range of products and services.

Millpledge acquires two steam sterilisers and installs them at its Gainsborough facility to sterilise procedure packs for the NHS.

Millpledge achieves Class J Cleanroom validation at its Gainsborough, Lincolnshire site allowing it to pack orthopaedic implant products for use in the human healthcare market.

Millpledge Healthcare the human-focused business of the Group starts manufacturing bandages and dressings in private label for Robinson Healthcare, Smith & Nephew and a handful of overseas government organisations.

Millpledge designs its own veterinary-specific range of IV fluid sets and accessories. Branded ‘Animill’ it launched at the BVNA congress. Over the coming years, it continues to expand with further additions to the range including needle-free sets, UV-protecting IVs and the AniSet Anti-Kink® tubing.

Millpledge Veterinary BVBA was established in Wingene, Belgium to supply customers with Millpledge products throughout Belgium, France, Luxembourg and the Netherlands.

Rapz Funny Farm® and Wild is added to the Rapz range increasing the bandages popularity with its distinctive character designs and animal prints.

Derek ‘Slim’ Carthew passes away on 3rd April after a very successful career in the animal health industry throughout which he was so well known and admired. Slim’s leadership, his love for Great Danes and exotics alike and his teachings remain as a defining undercurrent to our direction and outlook of providing better patient outcomes.

Millpledge North America Inc. opened offices in Los Angeles, California and continues to supply US veterinary hospitals with Millpledge branded products and supplies. Millpledge products are carried by every regional and national US distributor.

The Canada office and distribution office and warehouse opens in Toronto, Ontario. We now serve the whole of the Canadian veterinary professional with an ever-expanding choice of Millpledge Veterinary's products.

Following a long battle with cancer, Graham Cheslyn-Curtis passes away on 22nd February.

Graham’s vision of designing and developing more technical and practical veterinary-specific devices continues to provide the industry with improved clinical outcomes and value. Graham’s love of travel from a very young age led to the expansion of Millpledge’s international footprint throughout which he mentored a core team to continue the business development.

Millpledge Europe BV receives Marketing Authorisations for Prednizol® and Furosivet® veterinary pharmaceuticals allowing it to market and sell these long-standing products to vets in the approved EU markets.

Millpledge’s quality team achieve UKCA and EU MDR accreditation and registration for its human use Class I medical devices allowing is to continue to fulfil private labelled Human devices for EU-based clients.

Peace of Mind for the Veterinary Professional

VN’s or RVT’s on hand to support your business

Products Designed and Developed for the Veterinary professional

Products are available through your preferred distributor or via Millpledge direct. We also export to Central & South America.